Episode 3- H.P. Lovecraft and the Civil War Connection to the Alien Diaries- Episode 3 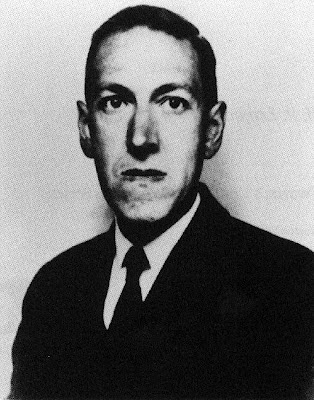 For those of you now following our new Kickstarter project for the Alien Diaries Anthology over at http://www.kickstarter.com/projects/1078742786/the-alien-diaries-translation-project this is our first update to the story of how Emily and her husband William acquired the two alien artifacts:

Before I go further, I will tell you that an article by the brilliantly elusive Joseph Trainor was responsible for Emily's husband tracking down the two Alien Artifacts which we call "The Alien Diaries."  Mr. Trainor is best known as the editor of the hard hitting magazine "UFO Roundup." In the December 9, 1999 edition, he published a letter H.P. Lovecraft wrote to the Gallamo Club (comprised of himself, Alfred Galpin and Maurice W. Moe) back in 1920, in which HP told them of a strange dream apparently involving alien grays.
Emily's husband (William) was absolutely fascinated by Trainor's thinking that it represented a translocation of Lovecraft's consciousness to the Civil War era, and that the story was there actually a re-experiencing of an actual series of events!  In fact, 1864 was a very big year for UFO sightings.
The intrepid Trainor wrote more on the topic, and I think he and others such as William and Emily began to wonder if the Lovecraft letter hinted that an alien craft crashed near where the letter's events took place.  William and Emily tried to contact Trainor, but he is a notoriously cautious and street smart individual.  Rumors began to circulate that the government wanted the matter dropped.
William and Emily decided they should investigate further on their own, with or without help.  They would be careful and take precautions.  The chance that they would find some evidence of an alien crash landing, they decided, was worth the risk.
Within a week of reading the Trainor article, William and his wife Emily were on their way to upstate New York in their bright red pickup truck.

Here is the letter written by H.P. Lovecraft which Mr. Trainor once again brought to the world's attention and started in motion the journey that ultimately resulted in the recovery of the two alien artifacts and William's disappearance, or "abduction" as his wife Emily believed to the day of her death:

"I have lately had another odd dream--specially singular because in it I possessed another personality-- a personality just as definite and vivid as the Lovecraft personality which characterises my waking hours."

"My name was Dr. Eben Spencer, and I was dressing before a mirror in my own room, in the house where I was born, in a small village of (in- FM) northern New York state. It was the first time I had donned civilian clothes in three years, for I was an Army surgeon with the rank of 1st Lieut.."

"I seemed to be home on a furlough--slightly wounded. On the wall was a calendar reading FRIDAY, July 8, 1864 I was very glad to be in regular attire again, though my suit was not a new one, but one left over from 1861."

"After carefully tying my stock (tie), I donned my coat and hat, took a cane from a rack downstairs and sallied forth upon the village street. Soon a very young man of my acquaintance came up to me with an air of anxiety and began to speak in guarded accents. He wished me to go with him to his brother--my professional colleague Dr. Chester-- whose actions were greatly alarming him."

"I, having been his best friend, might have some influence in getting him to speak freely--for surely he had much to tell. The doctor for the past two years had been conducting secret experiments in a laboratory in the attic of his home, and beyond that locked door he would admit no one but himself. Sickening odours were often detected near the door...and odd sounds were at times not absent."

"The doctor was aging rapidly; lines of care--and of something else--were creeping into his dark, thin face, and his hair was rapidly going grey. He would remain in that locked room for dangerously long intervals without food and seemed uncommonly saturnine. All questions from the younger brother were met with scorn or rage--with perhaps a little uneasiness, so the brother was much worried, and stopped me on
the street for advice and aid."

"I went with him to the Chester house--a white structure of two stories and attic in a pretty yard with a picket fence. It was in a quiet side street, where peace seemed to abide despite the trying nature of the times. In the darkened parlour, where I waited for some time, was a marble-topped table, much haircloth furniture and several pleasing whatnots covered with pebbles, curios and bric-a-brac. Soon Dr. Chester came down--and he had aged. He greeted me with a saturnine smile, and I began to question him, as tactfully as I could, about his strange actions."

"At first he was rather defiant and insulting--he said with a sort of leer, 'Better not ask, Spencer! Better not ask!'"

"Then when I grew persistent (for by this time I was interested on my own account--HPL) he changed abruptly and snapped out, 'Well, if you must know, come up.'"

"Up two flights of stairs we plodded, and stood before the locked door. Dr. Chester opened it, and there was an odour. I entered after him, young Chester bringing up the rear. The room was low but spacious in area and had been divided into two parts by an oddly incongruous plush red portiere. In the half next (to) the door there was a dissecting table, many bookcases, and several imposing cabinets of chemical and surgical instruments. Young Chester and I remained here, whilst the doctor went behind the curtain."

"Soon he emerged, bearing on a large glass slab what appeared to be a human arm, neatly severed just below the elbow. It was damp, gelatinous and bluish-white, and the fingers were without nails.

"'Well, Spencer,' said Dr. Chester sneeringly, 'I suppose you've had a good deal of amputation practice in the army. What do you think, professionally, of this job?'"

"I had seen clearly that this was not a human arm, and said sarcastically, 'You are a better sculptor than doctor, Chester. This is not the arm of any living thing.'"

"And Chester replied in a tone that made me blood congeal, 'Not yet, Spencer. Not yet!'"

"Then he disappeared again behind the portiere and emerged once more, bringing another and slightly larger arm. Both were left arms.

"I felt sure that I was on the brink of a great revelation, and awaited with impatience the tantalisingly deliberate motions of my sinister colleague."

"'This is only the beginning, Spencer,' he said as he went behind the curtain for the third time. 'Watch the curtain.'"

"And now ends the fictionally available part of my dream, for the residue is grotesque anticlimax. I have said that I was in civilian clothes for the first time since '61--and naturally I was rather self-conscious. As I waited for the final revelation, I caught sight of my reflection in the glass door of an instrument case and discovered that my very-carefully-tied stock was awry. Moving to a long mirror, I sought to adjust it, but the black bow proved hard to fashion artistically. And the whole scene began to fade--and damn the luck! I awaked in the distressful year of 1920, with the personality of H.P. Lovecraft restored. I have never seen Dr. Chester, or his young brother, or that village since. I do not know what village it was. I never heard the name of Eben Spencer before or since. Some dream!" (Selected Letters of H.P. Lovecraft, volume 1, Arkham House, Sauk City, Wisconsin, 1965, pages 100-102).
Posted by Rick at 4:29 PM

Be Prepred for the Ride of Your Life

Be Prepared for Terror