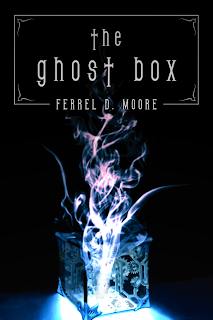 Over at White Cat Publications, we're currently on version 5 of the cover art for "The Ghost Box."  In the next version, the ectoplasmic vapors will be coming more from inside the box.  Thought you might want to see what it looks like before the final version.

And we're looking for new novels to publish, so check out the guidelines and if your work meets the criteria, send it along.  We're just getting ready to announce this over at Ralan and Duotrope, but I wanted to let you know first.
Posted by Rick at 1:06 AM 9 comments: 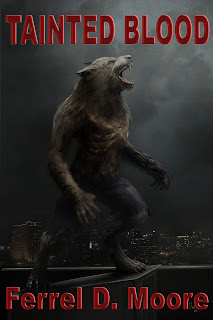 The Writing Tree versus NaNoWriMo 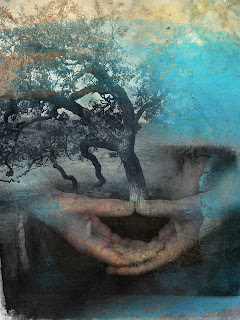 The question is not whether you can write 50,000 words per month, it's whether or not you should.

The value of NaNoWriMo is twofold.  First it brings writers together in a common project.  The value of this should not be underestimated.  Second, it gets writers writing.  No small feat that.

It's easy to find supporters of NaNoWriMo all over the web.  It's a developed and exciting community, and sometimes when you question a community movement you get hammered by its supporters, but I'll risk it.

Considering the speed of publishing today, we all feel the pressure to write faster so we don't get left behind.  The market changes rapidly, especially with the advent of eBooks.  The more we write, the reasoning seems to go, the more money we can make.

But in the race to be rapid, I wonder if we're sacrificing the power of our writing.  The ability to create compelling, emotionally moving writing takes time and reflection to develop.  It requires that we look deeply into ourselves and the people around us before we start typing.

This ability takes time to take root within us.  It begins small, like a seed, and cannot be forced to grow beyond its time or it will wither and die.

I believe most writers have the ability to be great writers, but they lose their chance by writing before they think.

One powerful novel is worth ten mediocre efforts.

If you want to read an examples of a writer with mature, developed power read something by James Lee Burke.  I guarantee you'll be impressed and put the book down thinking maybe it is worth it to take the time to think, really think about what you're writing before you put it to paper.
Posted by Rick at 10:06 PM 13 comments:

Real People Are Better than Characters 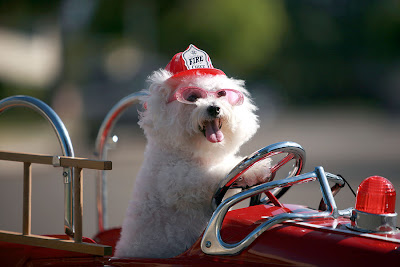 I love dogs- we have five of them.  But none of them ride in fire engine trucks and look that clean.  They fight.  They trash the house if we're gone too long.  They don't get along with the cats.  You get the picture.

Fact is, he little guy in the picture is a fake.  Just like a lot of characters.

Stereotypes are okay as a kind of short-hand for throw-away characters.  They're easy to write and and easy to source. You can almost buy them online.  The evil business person.  The average person fighting against the system.  Or my all-time favorite.  The  "elements re-assembled"  character.

The "elements-assembled" character is a Mix-Match creation.  To hide the fact that our characters are two-dimensional stereotypes, we take the character "parts" and arrange them in unconventional ways.
With luck, the patchwork characters will be considered original.  This applies to character mannerisms as well.  For example, instead of having a tobacco-chewing man (ugh) we write a tobacco-chewing woman (ugh) character.  Isn't that creative?  Isn't that original?

Who knew that creativity was so easy?!  Switch gender roles or switch personal habits and we instantly have an original character!

On the other hand, this might explain why more readers are reading less.  They know that writers don't actually study real people anymore, they study fictional characters.  They base their law enforcement characters on characters they've seen on CSI.  Or Law and Order.  Or.... you get the point.

After all, "Avatar" made millions and millions of dollars for its creators, and there isn't one character in the entire movie that's not a stereotype or recycled character.  So why should a writer study real people?  Why try to really analyze the human condition and potential to create characters that are more compelling?

Think of it this way- movie studios and TV production groups have an awful lot more to invest in their stories.  It's your mind against their computer animated graphics and music scores.  Ever notice how much they spend on music scores for movies?  It's because the music creates most of the mood, not the script.  Their writers can't pull it off without music and sound effects.

Fiction writers don't have a choice.  We actually have to make it happen in the reader's mind without music, without special effects, and without actors.  Movie studios have hundreds of millions of dollars invested.  Fiction writers, if we're lucky, have a decent laptop.

So we have to work a lot harder to make our readers really believe that our characters are real.  We might actually have to pay attention to real people to learn how to make believable characters.

Or we could keep on turning out two dimensional characters like the dog in the picture.
Posted by Rick at 12:27 PM 17 comments: 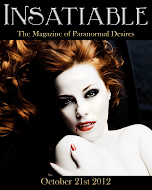 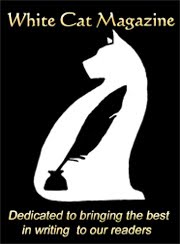